Global equities rallied in July, with optimism over corporate earnings and a seemingly dovish turn from the Fed boosting stocks despite a second consecutive negative US GDP growth. Overseas equities lagged their domestic counterparts, with the MSCI ACWI ex-US index adding just +2% in July for a -15% full-year return.

Within fixed income, bonds benefited from lower interest rates, with the 10-year treasury declining 85 basis points from its June peak despite the Fed’s second consecutive 0.75% rate hike. Chairman Jerome Powell indicated that the Fed may already be a long way toward their goal of slowing down economic activity in order to help cool inflation, suggesting a more favorable path of future interest rates for bondholders.

The Barclays US Aggregate Bond index gained +3% for July and is down -7% year-to-date. Commodity prices retreated again in July, helping to ease inflation concerns, most notably at the pump where gasoline prices declined every day in July and 16 states are now seeing gas prices back below $4. On balance, the Bloomberg Commodity index is still up +23% YTD.

With recession talk dominating the headlines, we continue to preach a data-driven approach to investing. Our proprietary Three Dials asset allocation methodology was unchanged in July, as we summarize below:

With its best monthly performance since 2020, the S&P traded above its 50-day moving average for the first time since April, an important short-term technical indicator.

That said, longer-term support levels will still need to be recovered before we believe the current downtrend has been vanquished. As such, our Momentum Dial remains in a Negative position at month-end.

US GDP declined at a -0.9% annual rate in Q2, following a -1.6% decline during the Q1. While this meets certain “back of the napkin” definitions of a recession, we’re more focused on key leading indicators like healthy consumer spending, a strong labor market, and expanding manufacturing activity.

We acknowledge that economic activity is slowing as part of the Fed’s campaign to get inflation under control, but so far key data points are strong enough that our Fundamental Dial is Positive through the end of July.

Strong quarterly earnings reports from corporate titans like Apple and Amazon helped fuel the recent equity rally, though these higher prices brought forward P/E ratios back above their long-term averages.

With forward guidance from S&P companies skewed to the downside as executives hint that there may be tough times still to come, we’ve yet to see a compelling entry point for stock prices, and our Valuation Dial continues to show a Negative reading.

Our Three Dials composite reading remains Slightly Defensive, with two dials fully “off” and one still fully “on” through the end of July 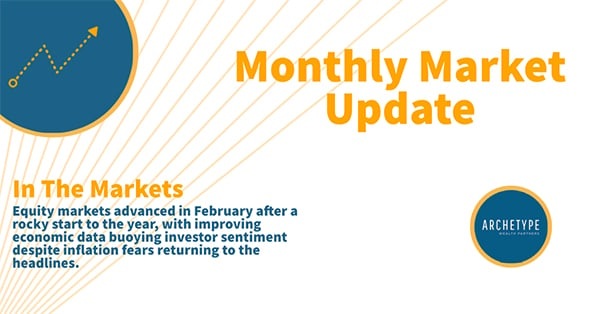